Sale on canvas prints! Use code ABCXYZ at checkout for a special discount!

This Painting Will Have You Seeing Double

Previous Next View All 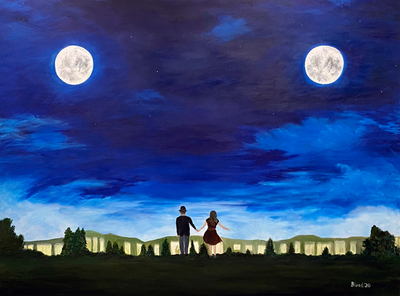 I enjoy sharing insights as to why I paint what I paint. The painting shown here is called, "Seeing Double" - for rather obvious reasons. My objective was to try and have the moons be close to identical and though they are close, they're certainly not exact.

So what led me to create this painting? Recently, I seem to get some visual idea stuck in my head. So I feel somewhat obligated to pursue it. In this particular instance, I kept thinking of two moons in the night sky.

Why? Perhaps in this upside down world of ours where everything seems to be a little out of whack, two moons make perfect sense.

Regardless, I knew I had to do a painting featuring two moons. So then I tried to think of different scenarios. One was going to be an apartment building roof with a large structure in the middle - maybe the rooftop exit. On either side, I was going to have two individuals staring off at the night sky, each looking at a respective moon. In another sketch, I had a couple sitting out under the night sky, each pointing to a different moon.

Ultimately, I decided on a fairly innocuous couple standing at the edge of a suburban style neighborhood lit up at night. (I decided to give the man a bowler hat just for the fun of it.)

In this version, it's like they're on the crest of a hill, looking out on suburbia and the two moons in the sky. The couple form a sort of triangulation with the two moons and I like the balance of that. It makes it all appear somewhat normal - even though two moons in a night sky are far from normal.

That's kind of how I feel about things these days. There is the semblance of normalcy - yet nothing is quite right, no matter how you look at it. Still, it's a beautiful world and we are blessed to be living in it. If your faith is strong, hopefully, that's as easy to see as two moons in the night sky.